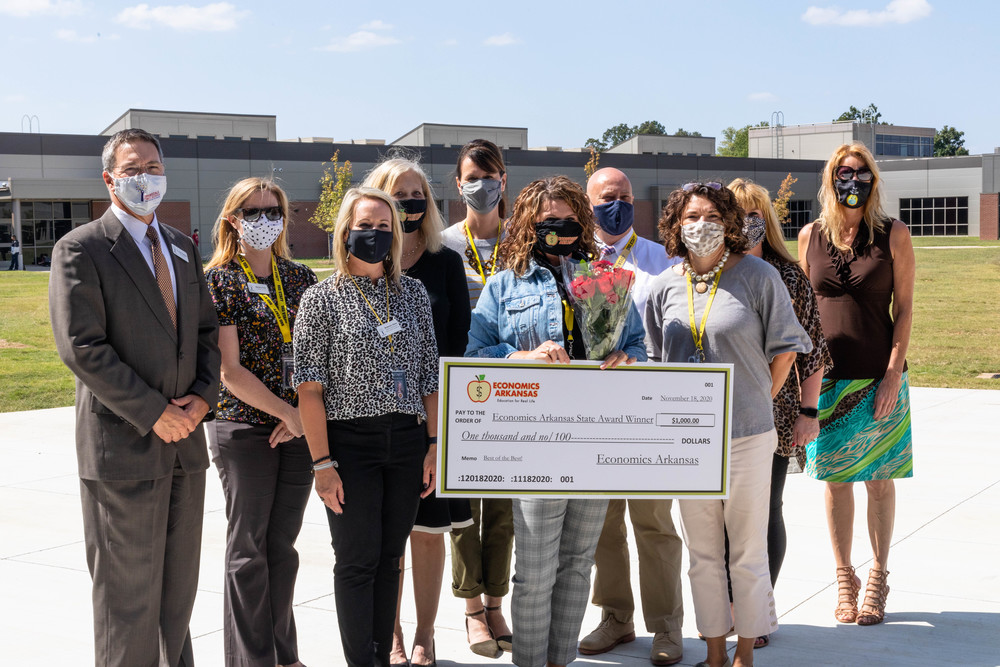 Jennifer Taunton, a gifted and talented teacher at Linda Childers Knapp Elementary School and Jennifer Malugen, a GT instructor at Monitor Elementary, are among the five teachers in Arkansas who have been named Bessie B. Moore Award winners by Economics Arkansas.

After a surprise visit by Associate Director of Economics Arkansas Marsha Masters, Taunton said, “I am grateful for the award. There is a study that says kids develop their financial habits before the age of seven. The way students become productive members of society is to understand how society in the economic world works. The earlier we start teaching economics, the better the kids will be in the long run.

“If I can teach them how the economy works, how they fit into it, how having a job and doing a good job are important, I can help them have a leg up.”

Malugen, also surprised when Masters appeared at the Don Tyson School of Innovation where Malugen is involved in the district’s Virtual Academy, explained, “I created a project on entrepreneurship with children and it was based on ‘Billy Sure Kid Entrepreneur’ and Amelia Bedelia’s book, ‘Amelia Means Business.’ The books gave our kids great opportunities to understand how other kids could be entrepreneurs and how they could be entrepreneurs, too.

“Both stories are based on children who actually were entrepreneurs in their own way. The students learned a lot of economic terms through literature. Amelia Bedelia actually created a lemonade stand and it was great to talk about how she did it.”

Masters, who noted the awards were established in 1995 to honor exemplary teachers for successfully developing outstanding economic and personal financial classroom projects, was not surprised that 40 percent of this year’s awardees were from Springdale.

“Springdale is recognized nationally for its great work and infusing economic education across the curriculum,” Masters said. “It’s an honor to be able to recognize these educators and say thank you for the work they are doing. They are going above and beyond.

“Jennifer Taunton is a leader in economic education. She found ways to infuse economics throughout her classroom the entire year. Whether it was through innovative projects that she was doing or a cooking unit, she found ways to teach her students basic economic concepts.

Masters added, “The University of Cambridge produced a study that showed children as young as seven years old are beginning to show adult money habits. We think that is true in all areas of economics. Economics is a science of decision making. We want our children at a very young age to learn how to make informed decisions because the decisions they make now will impact their future as well as the future of our community.”

Malugen agreed with Masters, noting, “I wish I would have learned a lot of those economic lessons as an elementary student. It can save a lot of problems of young adulthood. If they can grasp economic concepts now, they will be able to save money that can better prepare their future.”

As a reward for their efforts, Taunton and Malugen were awarded $1,000 grants from Economics Arkansas to enhance their economic instruction.

Taunton and Malugen are two of the many superb economic teachers in the Springdale School District. The lessons they are conveying to future adults in the areas of economics and personal finance will help shape the future of Springdale for years to come. District excellence in teaching economic principles is among the reasons Springdale Public Schools are #THEChoice.