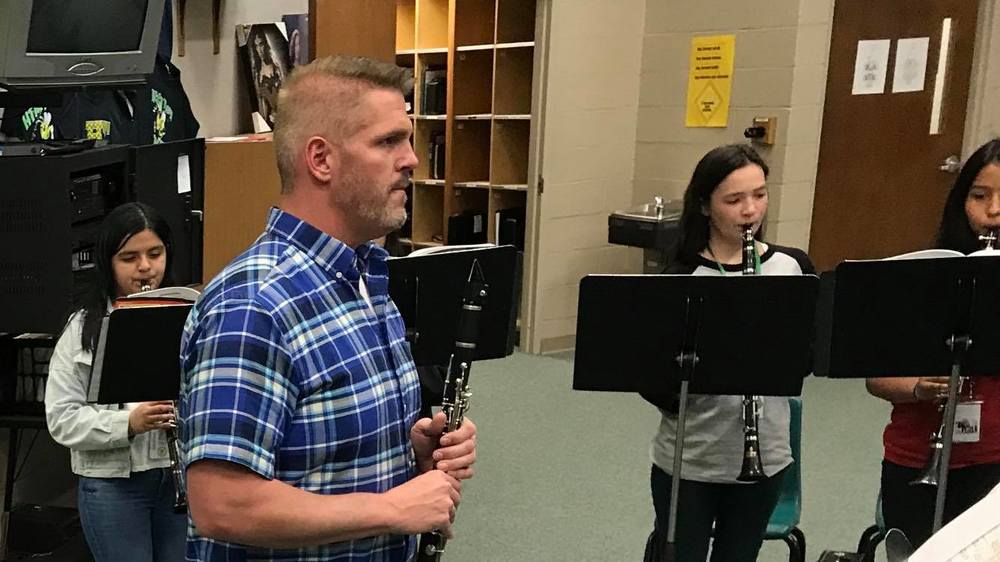 Danny Darrough should have been surprised but he wasn’t. When Tyson Middle School received the Merit Award from the National Association of Music Merchants it was a big, big deal. Darrough and Tyson students and faculty have every reason to celebrate. Darrough, though, had every reason to expect the award. After all, it was the third time Tyson Middle School has received the honor.

And, it is a great honor. Tyson Middle School is the only Arkansas school to receive it. That was the case in 2019 as well. Darrough isn’t sure whether another Arkansas school was selected when Tyson School won the award for the first time in 2014.

“It’s a difficult application process,” Darrough, who has overseen Tyson Middle School’s music program since 2011, says. “They collect a lot of information, all considering how well a school is serving its students in the area of music.”

How well does Tyson Middle School serve its’ students?

“We have an enrollment of 788 and 95 percent of our students are involved in bad, choir and/or music courses,” Darrough responds. “We have a great program that provides quality instruments for students who can’t afford them. Our district administration, school administration, school board, the Springdale Public Schools Education Foundation and our community provide great support for our music program and music throughout the entire district.”

How does Darrough get such buy-in from Tyson Middle School’s entire faculty?

“We try to make sure all our teachers know we are a team together,” he answers. “Our sixth grade teachers provide a great deal of advocacy for music with their students. Our seventh grade teachers understand how important music is to the total development of each student.

“Music plays a vital role in the development of character, dedication and intrinsic drive. Many students struggle when they get into music and it may take them until December or January to get it. Once they do, they see the success they can have and it drives them. They learn self-discipline and how to work with teams.

“My daughter, Bayleigh, is a great example. She was all-state in band for three years at Har-Ber High School. She had several schools recruiting her. She went to the University of Arkansas and played in the marching band as a freshman but decided she was more interested in going to cosmetology school. She made the switch and finished number one in her class.

“We agreed it was band that drove her to do so well in cosmetology school. Music teaches students the process of learning. It allows students to evaluate where they are and where they are going. Bayleigh had several offers when she finished school and is working at a highly regarded salon in Dallas.”

One of Darrough’s professional stops was in Dallas. He taught music four years there and four years in Indianapolis before moving to Springdale to accept the position at Tyson Middle School. His connection to Springdale was Har-Ber band director Jeremy Ford.

“I grew up in Tulsa and went to school at Northeastern State, then the University of Arkansas,” Darrough recalls. “I was teaching in Alma and worked with Jeremy on some projects early in my career. Years later he contacted me when Tyson Middle School’s position opened. The school is completing its 25th year and I am just the third band director the school has had. It’s a great place to be.”

Darrough stays connected with Ford since he helps with Har-Ber and junior high bands. He loves seeing his Tyson students develop into members of Har-Ber’s outstanding marching band.

“When I watch our former students perform in the Har-Ber band at Friday night football games I am in tears,” says Darrough. “We know where they started and how much they’ve grown. I can’t tell you how satisfying it is when seniors come back and thank us for getting them started in band.”

It’s also satisfying for Darrough to learn Tyson Middle School’s program has been cited again by the National Association of Music Merchants.

“The NAMM is always looking for ways to provide information to band programs throughout the country,” Darrough explains. “The schools they chose for their Merit Award are recognized as role models. Tyson Middle School’s name will be seen at several music conventions. Other programs will contact us. It allows us to promote excellence in music education.”

Criteria utilized in selecting Merit Award winners include: availability of music classes in the school and the opportunity for students to enroll in those classes, financial support of the school such as providing instruments to students who can’t afford them, opportunities to learn through technology, school demographics and the percentage of students in music, performance opportunities for students, involvement of special needs students, number of music teachers and their degree levels, curriculum, amount of learning students are able to accomplish during their time in the school, support of upper administration and school board and community support.

Tyson Middle School scored high in every area. Of course Tyson, like all Arkansas schools, is currently in unusual circumstances since all teaching and learning is digital rather than in the classroom because of the coronavirus. How is Darrough dealing with the situation?

“It’s not easy,” Darrough confesses. “We stay connected with our students through Google Classroom and Zoom. Next week was supposed to be our solo ensembles. They will be done through Zoom. We use Smart Music for the students to get assignments then send them to me.

“The hardest thing is we use the fourth quarter to prepare our seventh graders for junior high band and we put together next year’s Tyson Middle School band from among our sixth graders. But, we will figure it out.”

Darrough has figured out plenty during his time at Tyson Middle School, helping the music program become nationally recognized for the second year in a row and third time in seven years. Tyson’s outstanding music program is another reason Springdale Public Schools are #THEChoice.