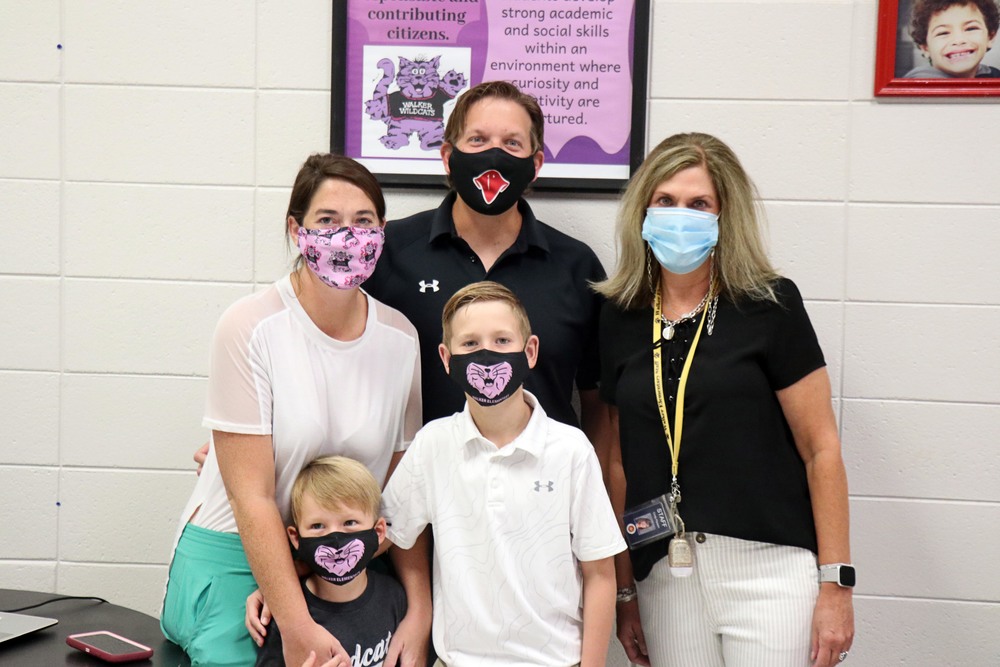 Steven Silvey moved from Oklahoma to Springdale as he was set to begin the third grade. He didn’t know anyone and he was quiet and shy. His teacher, Cindy Paxson, made the transition easier, assuring him the year would go well. Thirty years later there is another Silvey in Paxson’s classroom. It’s Steven’s son Landon.

“It’s amazing,” Paxson, in her 32nd year as a teacher at Walker, says. “I remember Steven well. Every time there is a student in my classroom who is new to our Walker Wildcat family, it’s always important to make them feel welcome. Steven was very quiet. I am glad he adapted well.”

Steven Silvey recalls, “When I first got to Springdale, Walker was full and I had to be bussed to another school. That was not a great experience. But, room became available at Walker so I was able to move into Mrs. Paxson’s classroom. I remember her welcoming me and helping me get acclimated. She was super nice. It told Landon to expect to be warmly welcomed into Mrs. Paxson’s classroom.”

“I really like her,” Landon Silvey says. “She’s a very good teacher. She is super kind and welcomes all her students.”

Paxson is happy to have Landon in her class. She is now teaching fourth grade and knew Landon was advancing after he spent last year in third grade.

“We were checking the lists before school started and another teacher asked if Landon got me as a teacher,” Paxson explains. “I said yes! I was excited to have him in my room. He and his dad have different personalities. Landon is much more outgoing and he goes the extra mile to make the other students feel welcome. It’s obvious he has been taught well. He is a blended student and I am excited to have him in my classroom on Tuesdays and Thursdays.”

Steven Silvey hopes life turns out as well for Landon and his other son, Lincoln, who will be in kindergarten at Walker next year, as it has for him.

“I met my best friend in third grade in Mrs. Paxson’s class,” Steven Silvey says. “His name is Shawn Trimble and he lives in Austin, Texas but we are still best friends. His wife, Emily, and my wife, Brittainy, are also best friends.”

Steven and Brittainy, who started her academic career at Smith Elementary, did not know each other until both played in the Springdale High School band. Shawn and Emily were also SHS band members.

“We were the last sixth grade class in elementary school before they opened middle schools and, as seniors, we were Pat Ellison’s (legendary SHS band director) last group,” says Brittainy Silvey, who serves as Walker Elementary PTA president. “Steven and I started dating in high school and we got married as seniors in college. Neither of us played in band in college. We knew weren’t going to be professional band players.”

They may have known they wouldn’t play music professionally but they couldn’t have dreamed they would have a son who would be in Mrs. Paxson’s classroom.

“It’s amazing to have the son of a former student in my class,” Paxson says. “I’ve been teaching 36 years and believe I have another 10 years of teaching left. That’s probably not long enough to have someone’s grandchild. But, I love teaching at Walker, love the Walker family and look forward to this year and many years to come.”

Teachers like Cindy Paxson are among the reasons Springdale Public Schools are #THEChoice.