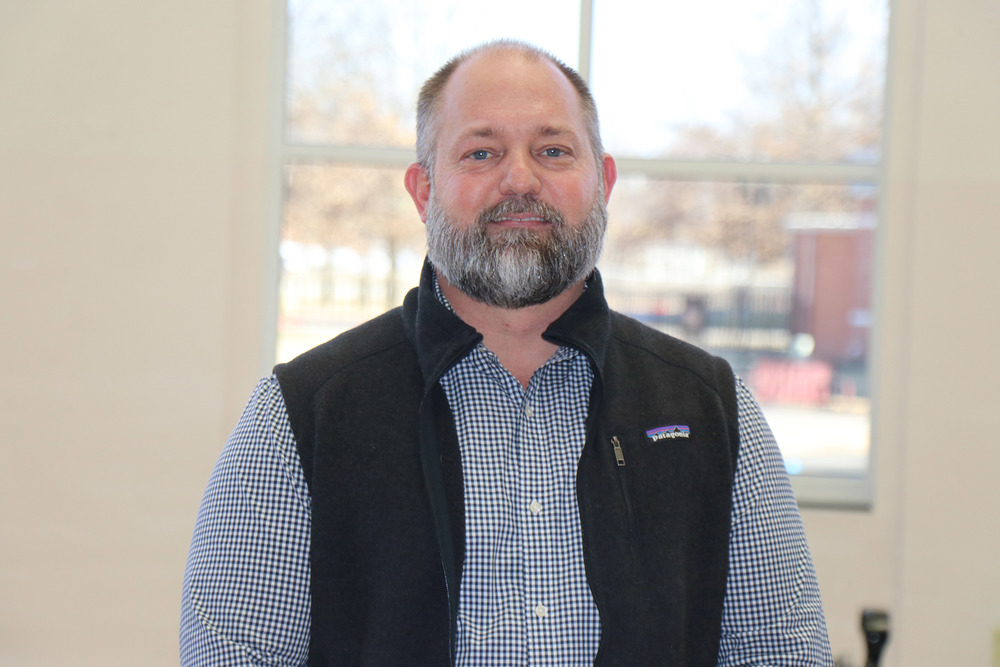 Springdale High School principal Jason Jones has no idea where he would be if he had neverknown Kevin Brown. Living in a travel trailer in a junkyard, Jones struggled until he switched high schools before his junior year. Brown became his football coach, mentor and even an employer.

“My dad was in the oil business so we moved a lot and I went to a lot of different schools in
western Oklahoma and north Texas,” Jones recalls. “The people at my high school during my junior and
senior years saved my life. It was a small school and Kevin Brown was the football coach. I played
football, basketball and soccer and the other students recognized me for my athletic ability.
“At our yearbook signing everyone was signing on my athletic pages. Coach Brown signed my
yearbook but I couldn’t find his signature. It was on my senior class picture. He wrote he had never had
a student work so hard in algebra two. That made an impression on me.”
During his last two years of high school, Jones was driving a combine, helping his dad with
construction, started his own carpet cleaning business and worked at Walmart. Brown and others
convinced him to attend college so he chose Southwestern Oklahoma State at Weatherford, very close
to his home.
“After I graduated from high school I came home one day and my parents said they were
moving to Hardy, Arkansas,” Jones says. “They were going to start a church there. They asked me if I
wanted to go with them. I didn’t. I was about to start college and I was already dating Sarah, my future
wife.
“So, basically I was homeless. I stayed with friends at times and I camped by the lake. I fished a
lot and ate plenty of hot dogs. Sarah came from poverty like I did and she graduated at the same time I
did. Our pastor, knowing I was homeless, suggested Sarah and I go ahead and get married so we could
find a place to live together. So, we did. I was 19 and she was 18.”
As a college freshman Jones began studying to be a chiropractor or therapist because “health
was the hot thing to do.” However, a visit from Kevin Brown changed everything.
“Coach Brown came to me while I was working at Walmart and told me he needed an assistant
football coach,” Jones explains. “He said I knew his offense and defense and he offered me a stipend. So,
even though I wasn’t much older than the players, I coached there for a year.
“He moved to a different school that wasn’t far away and asked me to go with him. He was also
the principal there. I arranged my schedule to take classes in the mornings, then I would go to his
school, sit in his office and watch him be a principal until it was time for practice. I knew right then I
wanted to be a principal. It might have been I wanted to be Kevin Brown but I became determined to
become a principal by the time I was 30.”
While he was keeping an overwhelming schedule, he and Sarah became parents. Their first
daughter, Mackenzie, was born two years after Jason and Sarah were married. Jones remembers
“writing papers in the library with Mackenzie in my arms.” Mackenzie is now a junior at the University of
Arkansas.”

Jones changed his major to education and just before graduating was offered a position as
assistant football coach at Garden City, Kansas. He also coached eighth grade boys’ and girls’ basketball.
“My second year at Garden City I told our principal, Robin Dexter, I intended to be a principal,”
Jones says. “In October of that year she called me and offered me an assistant principal’s position at our
fifth and sixth grade school. It was a high poverty school with about 800 students.
“I was very naïve. It was one of the largest school districts in Kansas and I didn’t even have a
master’s degree but Robin Dexter trusted me and must have seen something in me.”
Administrators at Siloam Springs saw something in Jones as well. They hired him to teach
history, serve as an assistant football coach and coach eighth grade boys’ and girls’ basketball as well as
assist the soccer coach.
“I taught and coached for two years, then became assistant high school principal for nine years,”
Jones says. “The principal, Charley Abernathy, made me feel like a principal. The superintendent, Ken
Ramey, was great to work with. When Charley left I became the principal and served five years in that
position.”
Three years ago Springdale High School had a vacancy and Jones was hired to be the principal.
“I am very grateful for the opportunity given me by Dr. (Jared) Cleveland and Dr. (Jim) Rollins. Dr. Marcia
Smith helped me a lot during the transition.
“All of this has been very unplanned. I have done better than I deserve. It is crazy where I am.
The people who knew me growing up would have been shocked to see me as a principal. Once I
determined that was what I wanted to be I told everyone I would be a principal by the time I was 30 and
asked how they could help me get there. I didn’t make it by 30 but was close.”
How rewarding is the experience of being a principal?
“I like being around the students and having influence,” Jones responds. “I also like being
around a group of people with a passion and common purpose to serve kids. I have a passion for
teachers. They have the hardest job. I want to encourage them and do everything I can to help them
serve kids.
“I can also identify with our students in poverty. I understand moving a lot and living paycheck
to paycheck. I understand the value of perseverance. I know much of life is who you surround yourself
with. My last two years of high school I was around different people. They changed my thinking. That’s
when I decided to pursue college.”
Things have turned out well for Jones and his family. Sarah works with the district’s health
department and social workers. Their middle daughter, Katlyn, is a senior at Springdale High School and
their youngest, Sophia, is in fifth grade at Walker Elementary. Jason and Sarah Jones are among the
educators who help make Springdale Public Schools #THEChoice.