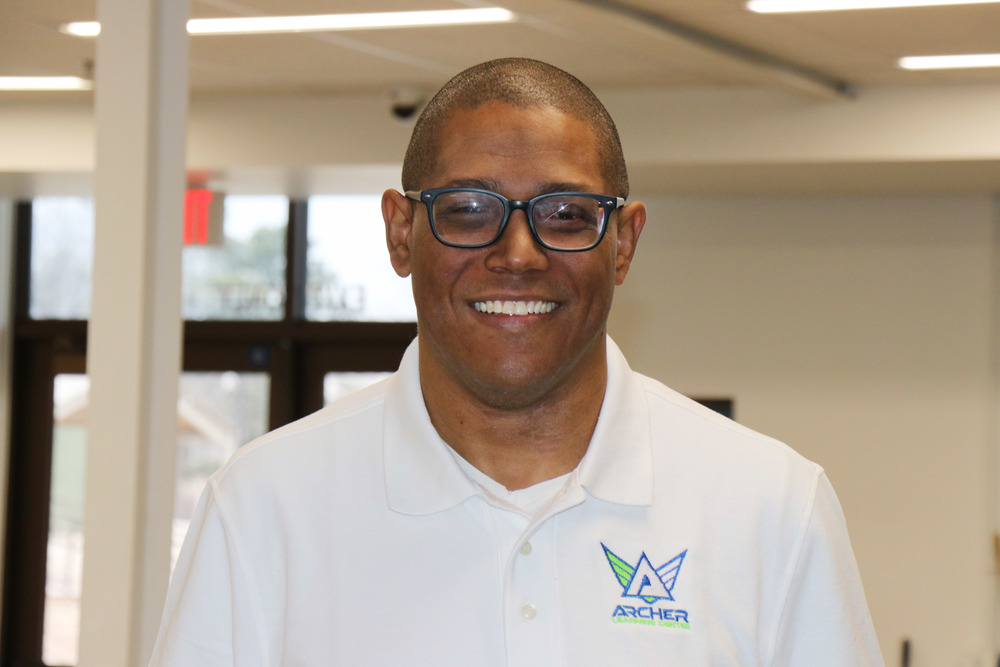 Dr. Coby Davis literally gave blood to get a job in the Springdale School District. Scheduled to be

interviewed for a teaching job at Sonora Middle School, Davis accidentally cut his arm reaching under his car seat. Fortunately, there was a Dollar General Store handy, so he bought some paper towels to wrap around his arm to stem the blood flow.
“Even though the interview was for Sonora Middle School, I met Jonathan Buchanan, the
assistant principal at the time, at the old Archer Learning Center,” Davis recalls. “He didn’t know I was bleeding during the interview.
“After the interview I was still bleeding so I went to the emergency room at the hospital. The
doctor was surprised I made it because he said I had lost a lot of blood.”
Davis recovered and was hired by Sonora’s principal at the time, Dr. Shawna Lyons. It was the
first step toward Davis eventually becoming principal at the Archer Learning Center.
After three years as a teacher at Sonora Middle School, Davis was on a mission trip when he
received a call from Lyons. She was moving to the Archer Learning Center as principal and wanted him
to go with her.
“I didn’t know anything about Archer,” Davis admits. “I trusted Shawna and looked at going to
Archer as a new opportunity but I didn’t know what I was signing up for.”
Davis was an instructional facilitator for year, then was promoted to assistant principal. He
served in that position for two years before Lyons took another assignment in the district and Davis was
named principal.
“I have loved the work at Archer since I came here,” Davis says. “My first year at Sonora had
been an adjustment for me because I had worked in college for many years. But, I loved the people at
Sonora and I love the people at Archer.”
Davis worked in college before starting at Sonora? How did that transition happen?
“I was teaching at Crockett Elementary in Nashville and working on a master’s in administration
at Tennessee State,” Davis responds. “I loved being a student. If you could make a career out of being a
student, I would have.
“The dean of the college of education at Lipscomb University in Nashville approached me about
teaching math methods. I finished my master’s work and taught at Lipscomb for nine years. It was a
great time. I even taught a traveling course at the Pine Ridge Reservation in South Dakota with 15
education majors. We also had a partnership with a camp in New York City.”
While at Lipscomb he completed his doctorate from Travecca Nazarene. Even though he was
happy at Lipscomb, he and his wife, Sheerah, who he met while in college at Freed Hardeman in
Henderson, Tennessee, wanted to move to a smaller community. When she secured a position with the
Mitchell Public Relations firm in Northwest Arkansas, they moved to the area.

“I planned to take a position at the University of Arkansas but it didn’t feel right,” Davis explains.
“So, I interviewed for a position at John Brown University and thought I would get it. I didn’t. So, I didn’t
have a job.”
Earlier in his career he had met Dr. Marsha Jones, who was an associate superintendent in the
Springdale School District at the time. Davis called Jones to let her know he was searching for a teaching
job. She said she would tell her husband.
“I had no idea why she said she would tell her husband,” Davis says. “I didn’t know he (Hartzell
Jones) was the district deputy superintendent. This was late in the summer and within a week I had
interviews with Jones, Lee, Young and Parson Hills Elementary and Hellstern and Sonora Middle Schools.
I took the job at Sonora thinking I would teach a year, then look for a position with a university.
Obviously, I’ve stayed and loved it.”
How did Davis get into education in the first place?
“My grandfather was a farmer and I spent a lot of time with he and my grandmother in the
summers,” remembers Davis. “One day he had me help him dig post holes. Every time I hit the ground
digging fence, I knew I was going to college. I enjoyed the farm but didn’t want to make my living there.
“At Freed Hardeman I started as an accounting major. I was going to be a tax attorney. But, I
didn’t like the business classes so I switched to education. During the summers I worked at a kid’s
college at Ole Miss, in Oxford, where I grew up. That led me to change my major to be a teacher.
“My goal was education law. As a senior I applied to law school at Ole Miss, Vanderbilt and
Pepperdine. I visited Vanderbilt and they had a dinner for seniors who intended to go to law school. I
realized I was not like they were. It wasn’t for me.”
So, he deferred his acceptance into law school for a year and taught second grade at the top-
rated school in Tennessee. He asked Sheerah to marry him but came to the realization “I couldn’t afford
law school.
“Sheerah and I had met in college and she was very popular. She was everybody’s favorite. She
was homecoming queen. I lucked out. She graduated a year ahead of me so my senior year I took all my
classes on Tuesdays and Thursdays so I could visit her every weekend.”
His profession never changed. He went from teaching elementary school in Nashville to
Lipscomb to Springdale Public Schools. His wife is now in human resources for Dentsu Sports and they
have a daughter, Shelby, who is a sophomore at Har-Ber High School. They love to travel, especially to
national parks.
“Our family didn’t travel much when I was growing up,” Davis says. “My dad had lots of siblings
so I grew up in the country playing with cousins and all our extended family. Every summer we drove to
Houston to visit an aunt who lived there. But, we never stopped to sight see. We drove straight there
and straight back.

“I wouldn’t trade the experience, though. My grandfather, post hole digging aside, had a great
influence on me. He was a person of faith and action. He marched with Martin Luther King. I was
inspired by knowing the struggles he went through.”
Davis’ faith has carried him on mission trips as far away as New Zealand and Nigeria as well as all
over the United States. He now oversees missions at his church.
While he remains loyal to Ole Miss athletically, Davis is happy to live in Northwest Arkansas. He
is among the exceptional administrators that help make Springdale Public Schools #THEChoice.