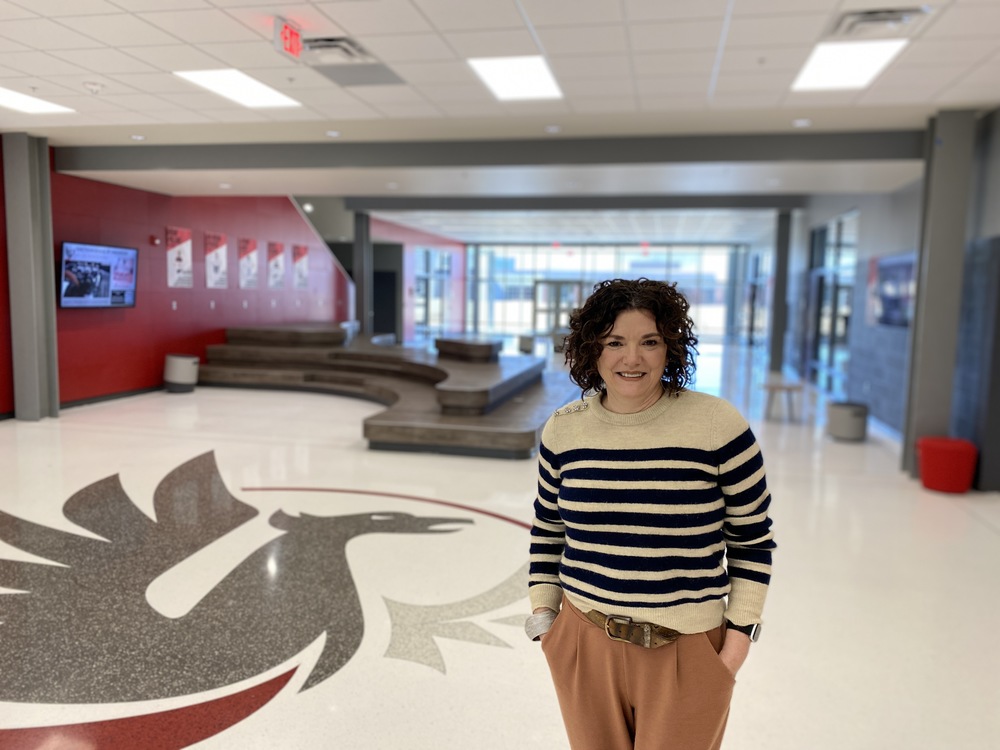 Kelly Boortz has roots in Georgia but quickly grew connected to the Springdale School District. When J.B.
Hunt Transport transferred her husband, Kevin, from Macon, Georgia to Northwest Arkansas, Boortz,
who is the principal at the Don Tyson School of Innovation, got over the initial shock of moving from the
only state she ever had lived in.
“When Kevin told me J.B. Hunt was moving us to Arkansas, I was surprised and nervous to leave home ”
Boortz recalls. “We came to visit and started looking around Northwest Arkansas. We met some people
who said our kids had to go to Springdale Schools and specifically Walker Elementary. Our son, Candler,
was a first grader so we bought a house in Walker’s zone.
“Our daughters, Gracie and Mattie eventually went to Walker, too. In fact, all three of our children went
from Walker to Hellstern Middle School to Central Junior High to Har-Ber High School. As a parent I see
how blessed we are in Springdale. We have amazing teachers who have invested so much in their
students.”
While Boortz had a marketing degree from North Georgia College, where she met Kevin, and had
worked in corporate marketing, she decided to pursue a teaching certificate once Mattie was in
kindergarten.
“I took a class at the University of Arkansas with Darrell Watts, who was the principal at Central Junior
High at the time,” says Boortz. “I did an exit interview with him and he told me if he ever had a job
opening he was going to hire me.”
There were no vacancies at Central when Boortz completed her UA classes so she took a teaching
position in Prairie Grove. A year later, Central Junior High School had a job opening and Darrell Watts
hired her. “Darrell Watts invested in me and gave me the opportunity to grow as a teacher and as a
leader,” Boortz says.
She taught at Central for five years and earned a master’s degree in educational leadership from
Arkansas State during that time. Paul Griep, who became principal at Central Junior High after Darrell
Watts retired, hired her as an assistant principal in 2015. Boortz had a wonderful experience at Central
as a teacher and assistant principal and noted, “Paul Griep became my mentor, and I am so grateful for
his support over the years.”
In the summer of 2018, Shannon Tisher was named principal at Don Tyson School of Innovation and
invited Boortz to come as an assistant principal. Boortz says, “When she offered me the position, I saw it
as an opportunity to grow and I took the plunge. A year later Mrs. Tisher joined the district
administrative team and I was named principal.
Growing up in Dahlonega, Georgia, Boortz never imagined she would be a principal and certainly not in
Arkansas. “It is such an honor to be a principal in this district and at this school. I look at myself and
think, ‘who am I to be here?’ I drive to work happy every day,” says Boortz. “The district administration
and school board gives us great support. I love my job and my team.”
The team at Don Tyson School of Innovation took on a new set of challenges when the pandemic
created a need for flexibility in the district in addition to opening a new phase of the building and

expanding the programs of study to include things like culinary arts, industrial maintenance technology
and beginning orchestra to name a few.
“We went from 200 virtual students last year to 2,500 this year in addition to our 1,200 on site students.
It was a challenge because there was such a rush to get everyone enrolled. None of what we are doing
would have worked without all of the principals working together. The entire team of Springdale
educators is involved in what we are doing at the DTSOI,” says Boortz. “When COVID caused us to go
from 6-12 to k-12 with our Virtual Innovation Academy, other building principals helped us with
teachers. Teachers from kindergarten through fifth grade joined our team from other schools and came
to serve. Our faculty members provide great support for each other. We truly are the Phoenix family.”
Her own family keeps Boortz rooted at home and within the community. Kevin retired from J.B. Hunt
and now sells real estate and has been a great support to Kelly in her role as principal. “Kevin is very
funny,” Boortz says. “He makes me laugh. He loves to cook and I enjoy his food. That works out well
with the busy schedule I have. We love it when our kids are home and we love going to the beach. That’s
downtime for us. If we are on the beach you will find me under an umbrella with a book. Both of us love
the simple things.
“Mattie is a senior at Arkansas Tech and is doing her student teaching at Pea Ridge,” Boortz says.
“Candler is a TCU graduate and is living in Dallas working in campus ministry. Gracie graduated from
Arkansas Tech this past May and is working at the Georgia state capitol.”
Kelly Boortz is a key member of Springdale’s growing family. She and so many other exceptional
educators help make Springdale Public Schools #THEChoice.